Kelly Harris runs restaurants on Jacksonville’s Southside and Frank Knapp Jr. runs business groups in South Carolina. But on frustrations over roadblocks facing small businesses, they’re in the same place. That’s why Knapp, CEO of the South Carolina Small Business Chamber of Commerce, ended up Monday outside Harris’s Village Bread Café on Phil Highway launching a nine-city swing through Florida to publicize a campaign labeled “Reform the SBA.” Despite regular statements by politicians that small businesses are the backbone of America’s economy, Knapp said, “The backbone of our economy is deteriorating.”

The campaign highlights concerns about slumping rates of new business startups and asks Floridians to urge members of Congress to create a new federal small-business loan program and give new responsibilities and resources to the U.S. Small Business Administration.

It urges Congress to back funding for what the federal government calls community development financial institutions as well as creation of a federal paid family leave and medical leave program that small business owners can use and increased use of small businesses in federal government contracting. Each piece is a huge ask on behalf of businesses that often have only two or three employees, maybe all one family. 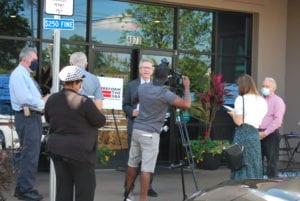 But in a season of sweeping plans for change in Washington, backers of the Reform SBA campaign are trying to make themselves heard before the opportunity is gone.

“Every journey begins with a single step,” said Knapp. He has no hopes the changes can become part of any legislation surrounding President Joe Biden’s upcoming American Families Plan initiative, but he’s hoping support from Florida’s big congressional delegation can help put the requests on Washington’s agenda.

“We want to be maybe next in line,” said Knapp, who scheduled appearances this week in Tallahassee, Tampa, Orlando, Sarasota, Lakeland, Daytona Beach, Melbourne and elsewhere to try to enlist Floridians’ support.

Members of Congress are concerned already about the future of at least some small businesses, which before the pan demic the U.S. Census Bureau said accounted for more than 40 percent of Florida’s private-sector jobs.

In February, Democratic U.S. Sens. Amy Klobuchar of Minnesota and Kyrsten Sinema of Arizona joined Republicans Tim Scott of South Carolina and Todd Young of Indiana to sponsor a bill requiring the U.S. Commerce Department to analyze causes for a drop in the rate at which startup businesses are being created.

The new businesses “account for virtually all new net job creation,” but are being formed at lower rates “in all 50 States, in all but a handful of 360 metro areas examined,” said text of the “Enhancing Entrepreneurship for the 21st Century Act,” which was first filed in 2019, but died and had to be reintroduced.

Like Harris and Knapp, the bill lists access to capital as one of the basic hurdles hobbling businesses. Banks just aren’t interested in making the small loans that can create huge differences in mom-and-pop companies, said Harris, who has co-owned Village Bread Café with his wife – there are two locations now – for about a decade.

Knapp said the crush for Paycheck Protection Program loans early in the pandemic spotlighted a basic problem that’s lingered over small businesses for years. Businesses who had relationships with banks had a chance to get help early on, but the many who had no connection to banks were at the bottom of the priority list.

The Reform the SBA recommendations include creating a program within the SBA to loan businesses relatively small amounts, maybe up to $20,000, provided that they receive training in fields like bookkeeping through SBA and coaching both before and after the loan.